I’m back after a week’s detour so to say, working on a performance project elsewhere in the city.

But nevertheless, I’ve also had the opportunity to reflect on the performance program at this year’s edition of Works at Work – and here are some of my thoughts.

First of all, I’ve been pleased to experience such variety in terms of form and substance. During the few days of the festival, the audience has experienced works ranging from the very minimal, slow performance with a stripped scenography, leaving the details of the body movements to be the main element to the technically advanced performance with a jungle of props and use of video and music. Also, some of the works involved the audience – or actually built the performance piece on the contribution of the audience – while others operated with the audience-as-spectator-from-the-darkened-rows model.

As such, also this year the performances have drawn upon a wider perspective of fields like dance, theater, visual art and even comedy – which is fully in line with the festival’s blurry positioning of itself somewhere between the white cube and the black box. An advantageous position from which traditions related to production within the various affected fields can be revealed and questioned.

Common to the seven performances is the fact that they have been produced and performed by duos – a great diversity of duos in fact, despite them all (except the students) being male-female composed.

In Quast & Knoblich’s sympathetic Fortune Teller, Hendrik Quast and Maika Knoblich complemented each other in a warm, entertaining and partially improvised hot chokolate fortune teller session with the audience. In Jee-Ae Lim and Pijin Neji’s Reprise there was on the other hand a tightly structured relationship between the two performers, whereas in deufert&plischke’s Niemandzeit, Thomas Plischke was practically the only one of the two being visibly on stage as Kattrin Deufert was inside a tent-like structure to which only few of the audiences had access during the performance.

On the train to Malmø Friday before the festival – heading to the warm-up performance by Lisa Östberg and Kim Hjorthøy at Inkonst – I asked the two curators, Cecilie Ullerup Schmidt and Ida-Louis Leclerc Larsen, about the curatorial fundament at this year’s program – besides the fact that they should all be duo performances.
They replied, that they had stressed it should be about duo practices more than merely duo collaborations – meaning they had an interest in the professional and established duo-identity working together over time.

As such, we did not talk much about the single pieces or about how the performance program is linked to the festival on a more thematic level so to speak. It seemed somewhat less important – both during the informal chat on the train and as such throughout the festival. This is not in itself a critique, but it struck me several times, that the performance works themselves fell into the background during the talks, where the main focus was on the production circumstances. I felt a notable lack of references to the works, which had just been on stage moments before – and vice versa; the works didn’t clearly reflect the ongoing discussion about production circumstances related to the duo practice.

In a way, it was easier at last year’s edition of the festival to find the link between the performances and the talks program. Perhaps that’s because the solo performer to a greater extent than the duo reveals the circumstances behind the work. At least it seemed easier to track key issues related to work production and solo practice – such as economy and precarity – in the works themselves, than it has been the case at this year’s festival.

And this is not uninteresting – for how come the duo seems to succeed in establishing and maintaining a distance between the work and the production?

Obviously, being two means shared work load and thereby also shared handling of all the issues there may be during a production period. While a solo work is somewhat more transparent, the duo seems to be able to blur the production conditions preceeding the work. Often, it’s no secret that a solo work has been produced with help from others, and if that’s not the case, the precarity related to doing everything alone sneaks onto stage – perhaps the size of two is perfect in terms of the illusion of the autonomous work. At least the conditions of the work production are somewhat less clear in a duo work.

It shall be interesting to follow up on these reflections in light of the group works next year! Will the group share the transparency with the soloist or the ability to blur with the duo?

Yesterday’s talk in the foyer between professor of Comparativ Literature Frederik Tygstrup and director of SMK – the National Gallery of Denmark – Mikkel Bogh has been occupying my thoughts this gray Sunday. As such, the topics aren’t new for me as I have had a growing interest in these matters for a while. But many good perspectives and new concepts were brought into play – Besides, the conversation was well moderated by one of the two artistic directors of the festival Cecilie Ullerup Schmidt.

Prior to the conversation, there was a reading of the chapter “Debt and Study” from Harney & Moten’s The Undercommons – fugitive planning and black study published by Minor Compositions in 2013. I wasn’t familiar with  this book, so it was all the more a nice surprise that copies of the book were given out to those present – as long as you had someone to share it with, as the books were intended as share books between two people. The reading of “Debt and Study” served as basis for the conversation, which lasted approximately an hour.

The conversation circled around the matter of indebtedness as a mode of being today; debt as an instrument of government. An indebted citizen is a controlled citizen. Sociologist Maurizio Lazzarato speaks in this context of The indebted man. Also thinkers like Franco Bifo Berardi is a key voice in relation to the wider topic of economy and subjectivity.

Frederik Tygstrup pointed to the fact that we are all both the debtors and creditors – and to how this relationship between debt and credit is a fundamental social element in time. With the establishment of debt a social relation is fixed until full repayment – for the most a distant or unachievable status as debt is not only concrete and material but certainly also immaterial – hence an abstract matter.

I come to think of – and this is a peculiar reference I know – The Enneagram (a model of human personality which is principally understood and taught as a typology of nine interconnected personality types). Leaving out all the critic that one could certainly (and would certainly) direct against this model, the second personality type – the helper – is an interesting figure in relation to the topic of debt and social relations. The helper is apparently a very sympathetic figure as it constantly helps others. What becomes clear though, is that the strategy of the helper is to help others only to make them feel guilty; To make them feel in minus and hence to establish a secured social relation in time. The others will always owe to the helper, and so the helper always has the guarantee of social relations. What it all comes down to here is a fundamental fear of loneliness.

In relation to study – and to come back to the conversation – debt is built into the education system as part of the before mentioned instrument of government; In a concrete sense when students are in debt economically and hence forced to work with the system in order to repay; In an immaterial sense when the concept of a study program is understood as the fulfilment of expectations. When so, the system reproduces itself and the possibility of autonomous action becomes less and less possible.

“Teaching autonomy is a contradiction in terms,” Mikkel Bogh – former head of the Royal Danish Academy of Art – said, and added that good education is training through disorganisation and paradoxes in order to – hopefully – be able to create some kind of autonomous subjects. The total independent subject is not a possibility, he said, so perhaps we should operate with the idea of relatively independent subjects instead.

In extension of this, Frederik Tygstrup brought up the notion of interest as being connected to indebtedness and hence to dependency and the lack of autonomy. Questioning our interests in what we study and in what we want to do could be a starting point in direction of a showdown with the society of indebtedness. Disinterest – as brought up by Cecilie Ullerup Schmidt in the conversation – could be a second step. Not disinterest as in apathy and depression but disinterest as in nonappealing, unfittable interest.

I’ve spend some time this Sunday thinking of my interests – and of possible disinterests. I will return with further thoughts on this – as well as with a reflection on the performance program at this year’s festival. Give me a moment to digest.

Another book advertisement. – This one can be read online though as well as downloaded for free.

Critique of Creativity, Precarity, Subjectivity and Resistance in the ‘Creative Industries’ – an analogy edited by Gerald Raunig, Gene Ray & Ulf Wuggenig, published by MayFlyBooks in 2011.

“In the hype of the ‘creative class’ and the high flights of the digital bohemians, the renaissance of ‘the creatives’ is visibly enacted. On the resonant conceptual ground of creativity, new social functions are unfolding – or are projected.”

Also among the contributors we find political theorist Isabell Lorey – lecturer at last year’s edition of Works at Work. In the text Virtuosos of Freedom: On the Implosion of Political Virtuosity and Productive Labour, she elaborates on the concepts of structural precarity and self-precarity so relevant in relation to artistic labour and life.

In short, the book is great. It makes one reflect on the possibility of overproduction of art – and more over, it makes one consider how far one is willing to go in realising an art practice, under what conditions, and for what purpose? 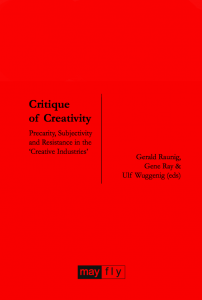 Deprecated: Function get_magic_quotes_gpc() is deprecated in /customers/5/f/1/worksatwork.dk/httpd.www/wp-includes/formatting.php on line 4330

Deprecated: Function get_magic_quotes_gpc() is deprecated in /customers/5/f/1/worksatwork.dk/httpd.www/wp-includes/formatting.php on line 4330